Cimpress is changing its online print strategy unexpectedly and pretty radically. In future its regional units will have greater influence – is this an act of strategic liberation?

In the last few days I received a rather long and in my opinion extremely controversial communication from Venlo that packs a real punch. Cimpress announced nothing less than a full-blown restructuring of its previously successful corporate organization.

Interested readers will of course now ask whether the corporation is facing serious problems and what’s going on at an individual company level. Well now, as is usual in press releases, which seek to justify a change of future direction, the measures are formulated in rather dramatic terms. But in actual fact there’s no change to its long-term objectives – to be and remain the global mass customization market leader focusing on print. A policy of decentralization in particular is to be introduced to enable the corporation to react better to increasing demands in culturally diverse markets. One of the priorities is to reduce centralized administration in favor of a more multifaceted senior management tier, which would enable the wide range of existing opportunities to be better exploited, in order to consolidate Cimpress’ position in the marketplace.

According to Robert Keane the ongoing decentralization measures are a logical consequence of previous growth and the corporation’s strategy – it remains to be seen if and to what extent this whole thing impacts on Cimpress’ individual brands. Cimpress as a mass customization colossus is certain to become more flexible as a result of this redistribution of human resources. However what is not yet clear is how specific responsibilities are to be allocated. What is certain is that the teams, which were previously part of the enterprise-wide central technology, production, supply chain and other corporate function teams, will now be allocated to the other business divisions. Once the changes have been implemented, only the central teams with responsibility for global procurement and supplier research, for the maintenance and development of the mass customization platform and for essential enterprise-wide services will continue to exist. In terms of numbers that means the following – only around three percent of the total headcount will in future work for the corporation‘s central bodies. At around 10,000 team members in total in more than 30 countries that is roughly 300. In relation to this issue, Keane says: “Culturally speaking it’s important that we remain small when we are growing“.

According to the corporation’s senior management team, human resource redistribution or restructuring will have the following impact. On the one hand 3,000 members of the central team are to be reallocated to individual business units, while on the other around 160 staff are to lose their jobs and future recruitment to certain Cimpress divisions is to be reduced. And as far as redundancies are concerned, these don’t just affect ‘normal’ employees, several members of the Management Board are also being let go as a result of decentralization. They include Ashley Hubka (Chief Strategy Officer), Lawrence Gold (EVP & Chief Legal, Talent & Sustainability Officer), Will Jacobs (EVP & Chief Supply Chain Officer Member) and Don Nelson (EVP & President, Mass Customization Platform Member). On the other hand Peter Kelly (EVP & Chief Executive Officer, National Pen) and Maarten Wensveen (Chief Technology Officer) are joining the Management Board.

What’s clear is that there will also be changes at the top of key Cimpress business units going forward. And it’s not just senior executives whose divisions are being decentralized that are becoming surplus to requirements, the remaining centrally managed units will also to some extent get new team leaders. 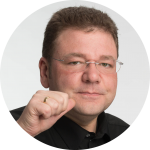 “In making this move Robert Keane is attempting to transform a battleship into an armada of speedboats. It’s a smart move, but one that will require painful surgery to the previous corporate culture. Keane doesn’t do things by halves, which is something you have to respect – ultimately this change of strategy means nothing other than regional markets having to prepare for significantly more agile Cimpress units. The change in strategy means that Cimpress will have a significantly more local presence in the markets in which it operates, which is a good idea as the world’s online print markets are growing regionally, which is why many regional strategies are required.” – Bernd Zipper

What’s definite is that full integration of NPC and other acquired brands will require much more effort from the corporation in the first half of 2017. And as far as Vistaprint is concerned, the plan is to bring the majority of its remaining products on board the mass customization platform. There is still no indication on the Cimpress website of any of the measures announced. It also remains to be seen how this sea change pans out in the weeks and months ahead and whether this radical surgery will pay any dividends. It can at least benefit the Cimpress share price. As is common knowledge, the share price took a dive in Q4/2016 but recovered at the turn of the year, but has taken a massive hit of more than 10% since the restructuring program was announced.

And what shape is mass customization colossus Cimpress otherwise in? Good would be my summary. That’s because there is nothing major to worry about, given the official figures. From October to December 2016 there were also some disappointments on the earnings front as the impact of the WmD acquisition (its strong performance) and the reduction in shipping costs for Vistaprint orders hit profits. But both aspects are set to boost profits in the medium term rather than impact negatively on them. And those are the only weaknesses of any significance. All the same, total sales increased in Q4/2016 by 16 % to some USD 577 million, if you include the most recent acquisitions. And Christmas sales were more than sound, especially thanks to the mass customization platform. The number of completed transactions rose to 2.5 million.

There has been a “sense” of change in the air for several weeks now, but that it would turn out to be so radical did surprise many market observers. What does this mean for regional markets like D/A/CH, UK, Japan, USA etc.? Quite simply, Cimpress will be providing greater competition. Keane can only fuel his strategy of central organization of data flows via the MCP platform and regionally based production by having local business units. He is thus displaying a high degree of foresight, because Cimpress can thus elegantly avoid the negative impact of current global developments, be they in the USA or the UK, and associated potential trade restrictions in the future. Cimpress is now large enough as well to set up regional supply chains – with regional knowledge that can be achieved quickly and effectively. Furthermore Cimpress is in a position to identify competitors faster, who could pose a threat to its business and either aggressively counter what they do in the marketplace or simply take them over. Mr. Keane – respect.

My take: You could assume that I am a Keane fan. But is there currently any other captain of industry in the print sector who plans and acts with such foresight? Hardly. Even the world’s major print companies, which to some extent sneered at Keane for ages, had better watch out – this new structure enables Cimpress to act faster and continuously provides local markets with the right concepts and responses. I always regarded Cimpress’ central organization as a weakness, because the business units out in the markets only got heard by those occupying this ivory tower if they shouted loud enough. According to Keane, the “old”, more centralized structure was the right solution back when Cimpress was still Vistaprint. But a lot has changed since then and Cimpress can no longer be reduced to just one major brand. Diversification in the sense of adapting to the many different cultural environments, in which Cimpress brands operate, is the future and to achieve this Cimpress needs streamlined central and also more flexible business units out in the field. We can certainly expect Keane et al to take their next steps in a carefully considered way. Even if I regard the departure of certain Board members as a real shame, this action shows Cimpress employees worldwide that Keane means business with the restructuring. Certainly what he’s doing is ruthlessly consistent, but this consistency is precisely what makes Cimpress successful.