If you like something you click on it. If you’re passionate about something, you have it printed. There is no universal formula for future success in the print industry. But what is definite is that print’s star is rising once again – so print providers need to exploit their opportunities!

Some people just don’t seem to get it – the print industry in its “traditional” form will soon be a thing of the past. And nobody, be they online print providers or not, can afford to demonize digitalization and the required process of transformation that comes with it. First of all it just doesn’t help and secondly evolution and progress in society and in the marketplace are hardly likely to be influenced by the inertia of a few print providers. And I have to disappoint those print providers that think that digitalization is only a short-term phenomenon, which “we only have to survive somehow” – it’s here to stay. Everybody is going to have to live and above all deal with this fact. And since there is no alternative to dealing with digitalization as far as print providers are concerned, the question is not whether you as an “affected party” should take a stance, but rather what stance you should take. At any rate I believe there is only one way to go – print or perish!

One thing that print entrepreneurs should not claim is that there is such inequality of opportunity. I can tell you for definite that that is not the case. Week in week out I see willing-to-transform print businesses that work in similar ways and have similar resources. It’s just that most of them simply don’t identify these opportunities properly or they operate within rigid, antiquated structures and simply don’t have the courage to change traditional ways of doing things. Sometimes matters are complicated by the fact that the boss is unable to spot trends etc. Those print providers that have so far managed to carve out an existence based on proper quality and the right level of service will continue to do so in the future if they heed the “new rules of the game”. No – to do this you don’t need to be as large as Vistaprint or invest the same amount of money as Onlineprinters. The wrong way to go would be to stand completely in awe of the digitalization pioneers. That’s because there aren’t so many companies that already do a lot right. So that’s one more reason to take the plunge yourself.

For the print sector digitalization doesn’t just mean extra workload but adding greater value. The prices of print products have stabilized following the fierce price wars of the last few years and it’s not just the major players who are benefitting, so too are the small and mid-sized print providers, which are at risk of disappearing from the market or of falling victim to market consolidation. Obviously the standard product price war is continuing – but “non-commodity” print products are once again finding buyers, even at higher prices. And what’s also clear is that there will continue to be consolidation – that’s just as inevitable as meeting market requirements. You just mustn’t forget that other industries are being disrupted to such an extent that radical changes in the way value is added are threatening the existence of many providers. Good examples of this are developments in autonomous driving – as soon as this becomes a reality the logistics and passenger transport businesses will be rocked to their foundations. 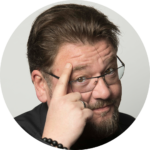 “The name of the game does not necessarily have to be “digital only”, but “analog only” definitely no longer works in the print business. And hasn’t done for a long time, no matter where you look. If you miss the digital transformation boat now, you will fall by the wayside! That’s why the watchword must be: print or perish.” – Bernd Zipper

Print can also do dynamic. Print providers have been catering to potential print customers’ divergent interests for some time now by offering successful concepts. Decreasing batch sizes or print runs are to some extent being successfully offset, as in the case of magazines, by customization and broader offerings. Mass customization is no longer an alien concept to some print providers, who have understood what social change and social needs are all about. And in terms of services, some online and offline providers are no longer restricting themselves just to printing. New offerings, especially in the B2B segment, are opening up new sales potential, especially if you can keep pace with customers’ digital transformation processes. These are all steps in the right direction. Obviously some print methods have in the past suffered setbacks; new methods are taking market share off old ones, but products are still being printed. And in the digital age, print still has its justification and its value. Print, no matter whether on paper or other substrates, still remains the only genuine manifestation of information among all the other informational media. As part of an increasing wealth of digital content, the value of print will continue to rise, it’s “just” that this value or worth needs to be communicated properly. That essentially depends on how customers treat print products. But in order to reach out to these customers, print providers need to ask themselves if they are doing everything in their power to achieve that goal, be it minor activity or major reorganization?

The website, which is of critical importance even for (online) print providers that have already undergone transformation, is one factor that represents the first step in opening the doors to transformation. Mobile commerce is on the rise, and some print providers unfortunately don’t have websites that are user-friendly let alone mobile-compatible. If you think you don’t need one, I should just like to tell you that mobile end devices now account for almost 60 % of all traffic in the D/A/CH region and currently one third of eCommerce sales.  Well, that may (not yet) apply to online print – but potential buyers still look for prices on their cellphones. If I assume that some 80 % of smartphone owners in Germany conduct their product searches at least initially on a mobile device, the probability of being found just on non-mobile channels or offline is drastically reduced. That’s because mobile traffic and conversion rates via smartphone search are set to increase in the next two years.

And if at this point you are thinking that you haven’t got a chance against the big boys even if you have a decent website, then you’re mistaken. That’s because although the major online print industry players are good at everything that’s standard, there is still plenty of room in the marketplace for those focusing on service, for specialists and for those frequently mentioned niche providers. As always nothing is just black and white, but there are many shades of grey in between, so it’s worth making the effort. As far as quality is concerned, you shouldn’t abandon your quality standards just because you are digitalizing your business. Take a look at print businesses that have already undergone transformation. The one thing they have in common is that they operate efficiently, very efficiently. Keep hold of your quality standards and communicate these to customers preferably with the aid of additional digital channels.

My take: Print is not dead – and neither will it be so in the future. And, as already mentioned, fight for what you believe in! Your competitors don’t splash the cash, nor are they years ahead of you. Your competitors have to work as hard as you do to achieve every little bit of progress. There is equality of opportunity; it just depends on who spots it and utilizes it. But it requires, indeed there is no alternative, getting to grips with new technology. That’s because you don’t learn anything from hearsay! And ingenuity is the key. Think about it – it’s worth it.

Right, I needed to get that off my chest. Thanks!

PS: if you like the picture at the start of this blog post, then why not drop by the zipcon store. This image is available as a stylish poster there 😉