Very successful in Germany and has been operating in the US market for just 10 months: MyPostcard provides an app-to-print service for vacation postcards and other types of greetings. A review before the vacation season really gets going.

A selfie in front of an olive grove in Crete or a picture of your kid posing by the pool complex –you can kiss goodbye to boring old off-the-peg postcards. Travelers that don’t have any great vacation pics on their smartphones are rare, so why not design a postcard ad hoc and commission shipping via an app. Selecting from a postcard rack in the souvenir store is a thing of the past and vacation greetings can be given a very personal touch. That’s what Oliver Kray thought too when he set up MyPostcard in Berlin at the beginning of 2014. Although his is not the first business to operate in this segment, it is nevertheless one of the most successful, given that his firm is only a very recent start-up. So that’s reason enough to take a closer look at this app-to-postcard business and the market.

MyPostcard is one of those exponents of using app-to-print to harness the power of digital for print and it can therefore manage the balancing act between purely electronic vacation greetings and classic souvenir store postcards. That’s music to the ears of postal businesses around the world, especially as that means that several million extra postcards are sent annually. According to a 2016 Bitkom survey, roughly half of all vacationers still send greetings home by post – and simple-to-use apps like the MyPostcard one are responsible for this. This app-to-print provider has already made a name for itself and partners with a diverse range of major companies from the tourism industry. In 2016 it generated around two million Euros in sales – given its headcount, this Berlin-based start-up is currently viewed as a small enterprise by German standards. The CEO and founder of MyPostcard has a design background, which is immediately apparent in its greeting card store. That’s because it features several thousand ready-to-use designs, motifs and details, which can be used solo or in combination with your own picture material.

Mobile design of personalized vacation greetings is incredibly simple – after downloading the app at iTunes or Google Playstore users can select from a range of different postcard templates, e.g. a collage featuring multiple details on the face. One or more photos can also be uploaded from recently taken pictures, from your photo album or straight from Instagram. After that the picture material is scaled to size and given a border. The buyer has a maximum of 450 characters  – depending on the font and font size selected – at their disposal for the text on the reverse side of the postcard. Buyers then pay, either by PayPal, SEPA direct debit, credit card or via the buyer’s credit balance on their customer account. Cards are then sent within Germany or worldwide costing 1.99 Euros.

Oliver Kray wants MyPostcard to become the market leader, not just in Germany but internationally too. I have therefore compiled the following outline, which is based on data from iTunes, Google Playstore and corporate websites (as at 13.06.2017). Since I don’t want to portray anybody in a bad light, I have dispensed with an average number of reviews here – my only aim is to show what advantage the specialized providers have over the online print providers that treat app-to-postcard as a sideline.

Why are there so few providers here? Because some of the services that I came across during the course of my research are in my opinion and that of other users pretty rough-and-ready, which is reflected in poor update management by some providers. And as I said before, the quantity of reviews does not represent the number of users or even downloads. To date the MyPostcard app has been downloaded more than one million times, which means that of the major players in this segment it is in second place behind TouchNote, which is (still) the download leader. 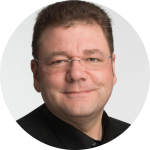 “No searching for stamps, mobile design and payment options and attractive pricing for vacation greetings with a personal touch – MyPostcard’s sound concept satisfies a range of vacationers’ wishes at the same time.” – Bernd Zipper

Obviously such services have been provided for several years now, but the abundance of providers in the segment has increased significantly and major players from the online print industry like Cewe are getting in on the app service act. However MyPostcard is of interest because it has only been in business for three years and is also equity-financed. Its focus is on postcards you can personalize and growth of this formerly niche offering (the company now offers other products as well) is being proactively accelerated through expansion. Although MyPostcard only launched its app-based postcard service online in 2014, the current market leader in this segment, TouchNote (UK), has been around for a lot longer than that. Although they are not (yet) direct competitors, given the geographical distance between them, that is set to change in the near future as MyPostcard expands further. The Berlin-based app and digital print service provider covers the whole of Europe from its current location, and is continuing to search for investors in the USA and Germany since entering the US market (by opening an office in New York).

My take: the opportunity of designing a postcard yourself using an app and paying for it immediately irrespective of your location does not make sending it a generational issue among users. Alongside the pricing argument – app-generated greeting cards are definitely not too expensive – that is to my mind one of the main reasons why the app-to-postcard concept is currently extremely popular and will be in the future, not just with younger travelers. MyPostcard in particular has operated under this expressive brand name since 2014 in a way that really makes commercial sense (exactly like Willie Brandl from meinnotizbuch.de, whom I recently profiled here) and is building on the success of the last three years by expanding in the USA (from August 2016 onwards). Over time the company has also evolved from being a single-product business into a multi-product company offering photo prints that you can order via app. MyPostcard has come up with a corresponding browser version for all products to avoid being restricted to just the app. This season some app-to-postcard providers will most likely quit the market, because they are simply overshadowed by more user-friendly programs. Some of the online print big boys are still lacking such a useful app in their portfolios – we shall see how long that remains the case.