Whenever the EU attempts to regulate eCommerce by imposing new regulations on the industry, most onliners have misgivings. I take a closer look at this issue in an interview with HÄRTING Rechtsanwälte’s Dr. Martin Schirmbacher, Initiative Online Print’s legal counsel.

Bernd Zipper: A new duty of information has yet again been imposed on the eCommerce industry. What’s all that about?

Dr. Martin Schirmbacher: Indeed, the eCommerce industry has once again been saddled with new duties to provide information. The ODR (Online Dispute Resolution) Regulation has been in force since January 9, 2016. This obliges every online merchant to incorporate a link to the new ODR platform.

Bernd Zipper: Hold on a second. What platform is that? Whenever the EU announces something, I get a sense of foreboding.

Dr. Martin Schirmbacher: What is meant here is a new online dispute resolution platform, which the EU has initiated. This involves out-of-court settlement of disputes between online merchants and their customers.

Bernd Zipper: And where does this link have to feature within the store site?

Dr. Martin Schirmbacher: Preferably in the General Terms & Conditions or in a new footer tab at the store operator‘s website.

Bernd Zipper: We have taken a look at the new platform site, but there isn’t much to see yet…

Dr. Martin Schirmbacher: Right, the platform doesn’t exist yet. There is just a notice telling visitors to drop by again from February 15 onwards. Currently the whole thing is only available in English. The site only adds value once the online dispute resolution functions have been activated.

Bernd Zipper: And to what extent does it make sense to refer to a not-yet-existent website? Won’t that just unsettle consumers?

Dr. Martin Schirmbacher: Of course it makes no sense whatsoever. However the EU Online Dispute Resolution Regulation has created a corresponding duty to provide information and this regulation has been in force since January 9. Of course the plan was to have the platform up and running by this point, but completion has been delayed. And because so many lawyers have been talking about this new obligation, there has been a flurry of activity among online companies.

Bernd Zipper: Is it conceivable that legal action will be taken against business owners that haven’t incorporated this link prior to February 15?

Dr. Martin Schirmbacher: It’s theoretically possible that business owners, who don’t integrate this link, could be warned by competitors or consumer protection organizations. But I don’t think it is particularly likely to happen before February 15. But because the link has to be incorporated anyhow, business owners might as well do it right away. 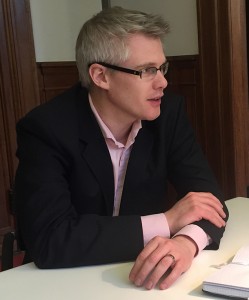 Dr. Martin Schirmbacher: The new duty of information is just part of a larger package emanating out of Brussels. There it is entitled “Online Dispute Resolution”. The intention is to give consumers a simple method of obtaining their rights. That’s also the purpose of the draft Consumer Dispute Resolution Act, which is shortly to pass through the Bundestag and Bundesrat (Lower and Upper Houses of the German Parliament). This is intended to give consumers the opportunity to take legal action in pursuit of their rights, not via the courts but via so-called ADR (Alternative Dispute Resolution) proceedings.

The Act will then create several more duties of information, which all online merchants must comply with. It’s anticipated that every business owner that operates a website or uses GTCs will have to refer explicitly to the Alternative Dispute Resolution centers from 2017 onwards. The appropriate information must appear both on the website and in the GTCs used.

Bernd Zipper: Taking a look at the future, do you think that these “new” out-of-court dispute resolution opportunities will lead to fewer lawsuits? And overall is that good for consumer protection?

Dr. Martin Schirmbacher: That’s difficult to say. The sceptics don’t see them having a major impact. The majority of disputes between online merchants and their customers are already settled amicably and as a rule in favor of the customer.

You can obtain further information about the duty of information and website incorporation relating to the ODR Regulation here and the German Consumer Dispute Resolution Act (VSBG) here.

Here is the link to the platform: (http://ec.europa.eu/consumers/odr)