By Redaktion on 2. February 2016 Technic

Cewe-Print is the first company anywhere in the world to qualify and can now wear this new TÜV seal of quality with pride. Yet what gave rise to this seal? What’s the background to this story? Time to reveal a few secrets…

There are loads of quality seals in the eCommerce sector. Some enquire about whether the customer was satisfied with their purchase, while others award stars of some sort. I am often unsure why stars have been awarded and what it all means – and so fate took its course two years ago. Yes, I admit, I played a minor role in getting this TÜV seal of quality up and running. That’s because I was fed up to my back teeth of barely being able to rely on a seal of quality. It is vital, especially in the online print business, that customers are not only able to purchase products securely and reliably – i.e. that they can be sure of not being taken for a ride by an online rogue – but also that quality is spot on.

Now we in the zipcon team have been going on “mystery shopping” trips for years. That’s got nothing to do with putting on an amateur performance of ‘The X-Files’ , but simply that we check out online print providers from time to time and the quality they deliver. That’s undercover, of course, with neutral return addresses and all very discreet. We do this on the one hand (watch out – commercial break) on behalf of clients, and on the other to map the print-quality market in Germany, Austria and Switzerland. The origins of this are that I believe that a low price alone doesn’t characterize the “quality” of a print product. I firmly believe that customers are also willing to pay good money for great-quality print. And the current euphoria surrounding letterpress, which usually involves pretty expensive products featuring awesome quality and feel, proves I’m right.

What has annoyed me for years is that nobody has come up with the bright idea of testing the products and services that online print providers actually provide. Well now, and readers of this blog are likely to know this, I am a real fan of online print and I am delighted that “print” has attained a new status in the media landscape. But that can’t be based on “cheap” or “bargain basement” prices. There’s much more to it than that. What matters is that a product, which, for example, is launched claiming to comply with a certain ISO standard or the bvdm’s PSO standard, actually possesses those characteristics.

We started testing online print providers using our own “secret” forms of testing. The results we got were often pathetic. The blunders we made are enough to fill many a long, beery evening… That’s why I approached TÜV Süd a couple of years ago. Back then TÜV Süd had just initiated its “Safer Shopping” seal of quality and the way those guys scrutinized online stores really impressed me. They really put the whole customer experience to the test and rate it; they even try and hack into systems, because the focus should after all be on a secure and reliable purchasing process. But what I believe was missing were product ratings. Well, if I buy off-the-peg sneakers, a store operator usually doesn’t have any influence on them, but if the product is custom-made for the user, it needs to be tested. 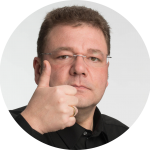 “If an online store is awarded the “Online Print Safer Shopping” seal, it can be proud of the fact, because it has passed the sternest test in the eCommerce sector.” – Bernd Zipper

So we got talking with TÜV Süd and soon agreed that a new seal of quality was required. After long definition phases and the development of several “secret” forms of testing, the collaborative venture between zipcon and TÜV Süd began to take actual shape. The only thing was that I now faced a dilemma. I can’t really audit my customers, i.e. online store operators, myself. It soon became clear that “quality checks and TÜV issues” had to be transferred to a separate company – praeambel.com.

Well now, I own the company, but whether you believe me or not, I am contractually prevented and I voluntarily refrain from gaining knowledge of the test results. It’s simply not the done thing and is incompatible with my “consultant’s sense of ethics”. Therefore Rolf Tippner, the head honcho at praeambel, and Uli Wolzenburg are in the driving seat here, to ensure a clear separation of responsibilities. These two professionals do the “undercover” testing of print quality, supported by zipcon consulting Berlin (Prof. Florian Süßl), and they provide useful tips on how to eliminate problems, should indeed any problems arise. Only once that has happened, does the TÜV team get going – both companies complement each other superbly.

And so I take no small amount of pride in the fact that Cewe-Print is the first company worldwide to be awarded this seal, following lengthy testing processes. Yet it was a difficult birth, because the testing procedures are really tough and any company that passes this test can be proud. Background information can be obtained online here.

OK, so you might be asking yourselves, if that guy Zipper provided the impetus for this kind of seal, why is he so delighted? Is it KERCHING time now? Well, actually not. We invested resources in praeambel and in the development of forms of testing and test procedures for two years, since we firmly believe that the industry needs a neutral testing center for print and online print quality. The work has been worthwhile, alone just to reinforce consumer rights and provide often print-illiterate consumers with assistance. No, I am not Robin Hood, but my business provides consultancy services to and does not audit online stores – that’s why zipcon consulting and praeambel.com will continue to operate in future as strictly separate businesses. I just wanted to get that off my chest …

Plenty of store deficiencies and security loopholes are detected during the course of the TÜV test – the guys call it “the audit”. An entire TÜV team conducts the tests for more than a week; the on-site audit lasts more than two days, while the testing of print quality and the mystery shopping last more than two weeks. The results are then pretty sobering to start with; but based on the TÜV/praeambel test reports, the store operator can identify their problem areas and remedy their problems. This not only makes the store more secure and reliable once the procedure has been completed, but the entire purchasing process, and , which is vital in online print, the products have also been tested and deliver a verified standard of superior quality. Mission accomplished.

And so I would like to congratulate the praeambel team at this point for their superb work and express my respect for the TÜV guys. But I should also like to thank Cewe-Print, because to expose a major company to a test procedure of this kind requires not only courage but also a certain status.