In the past we have observed the path of Cimpress and have had intensive discussions with Robert Keane about the industry and his company. At the Online Print Symposium, Robert Keane gave a much-noticed lecture. He has experienced and moved a lot and acts like a metronome in the online print world. Now we have received an exciting interview with the Cimpress-CEO from Ludovic Martin, an observer of the international print industry.

Ludovic Martin: First of all, what is the current situation at Cimpress? Have you recovered from the Covid-crisis?

Robert Keane: Cimpress revenues, excluding the positive impact from currency exchange rates and acquisitions, grew 38% for the quarter ending June, 2021 compared to the same quarter in 2020, so we are moving in the right direction. But this was about 11% below revenues from the quarter for June 2019. That means that we still have more to go, especially when you recall that, prior to the pandemic, we were growing about 10% per year.

Ludovic Martin: In which regions have you been the most impacted by the crisis?

Robert Keane: All regions were hit last year, but recently Europe has continued to be more impacted, whereas we have stronger performance in North America and Australia.

Ludovic Martin: Q4 FY21 is showing a strong increase in sales. In which country is the bounce most spectacular? Has this trend continued in July and August?

Robert Keane: North America and Australia have been stronger. In the quarterly financial document for the June quarter, which we published at the end of July, we noted that trends remained positive in July, and that we still see Europe struggling more to recover revenues than other markets.

Ludovic Martin: Are you confident for the end of the year and the peak season, especially considering price raise for paper pulp, inks… and risks of shortage?

Robert Keane: Like everyone in the industry, we do see pressure on the cost of these materials, and some concern with shipping. But we think we have proactive plans in place to manage through this.

Ludovic Martin: As a CEO and a world citizen, what are your key learnings after 1.5 year of Covid crisis?

Robert Keane: Before the pandemic, most people took for granted the benefits living and working an integrated, cooperative, global economy. Everything from supply chains, to financing, to labor markets was so fluid. To say nothing of the enjoyment of travelling to learn about other cultures. For instance, the integration of Europe over the past thirty years has had amazing benefits. The disruptions from the pandemic illustrate how the economy and society suffer when that global system is interrupted. I hope it makes people more appreciative of the benefits we have from the changes over the past thirty years from globalization in general and from the integration of Europe in particular.

Ludovic Martin: Decoration, apparel, print-on-demand, photo albums markets have boomed during the crisis, while commercial printing suffered a lot. Do you regret to have sold photo album division like Albelli in the past years?

Robert Keane: I agree that those consumer-oriented markets have done well, but we think we made the right decision to focus where we did. We were never going to be the leader in the photobook market.

Ludovic Martin: Cimpress is investing on design marketplaces, with the purchase of 99designs. Do you think it is complementary or competing with online editing solutions like Canva? What is your vision of the future of professional designers?

Robert Keane: We see it is complementary. Of course, over twenty years ago Vistaprint invented in-browser do-it-yourself design, which works very well customers who are not graphic arts professionals so they need templates. We like that business, but it is very different than what 99designs does, which is to serve customers who do not want to design themselves. In other words, to serve customers who value graphic arts professionals because they know that those professionals can help them look really great via design. As to the future of professional designers, I think they have a very bright future if they focus on high-value design. The simple edits and template-based work you see at Vistaprint and Canva is right for some customers, but certainly not for all.

Ludovic Martin: Vistaprint just partnered with Wix: how this partnership will co-exist in parallel with the current website generator provided by Vistaprint?

Robert Keane: We expect to migrate those customers to Wix, and to focus our development resources on integration across physical and digital products. We partnered with Wix so that we can offer our customers the great technology and customer experience that Wix provides.

Ludovic Martin: Vistaprint is multiplying partnerships in professionals’ sports in the US: do you plan to make such partnerships in Europe to strenghten the brand awareness?

Robert Keane: Potentially, over time. But we don’t have any near-term plans to do so in Europe. We are really still only just testing this concept.

Ludovic Martin: The African market is opening up to eCommerce at a dramatic speed. Multiple online printers are appearing in Senegal, Camerun, Nigeria, South Africa or Morocco. Do Cimpress plan to focus on this market?

Robert Keane: No, not for the foreseeable future. We have too much opportunity in the countries where we are already present.

Ludovic Martin: With Amazon Custom, Gelato, CloudPrinter or Imprimerie Européenne, the marketplace model is rising in the print-on-demand industry, like it happened in other markets like travel… A couple of years ago, the mass-customization platform was designed to be opened to external fulfillers or designers. Is it still relevant today? Are independent printers able today to become fulfillers for Cimpress brands?

Robert Keane: We chose to discontinue the marketplace approach we tested a few years ago, which was called Cimpress Open. We still, of course, work with many external fulfillers via the MCP, and we have many, many happy external print partners with whom we plan to continue to grow together. We are always open to finding more partners.

Robert Keane: For our production facilities, of course that can’t happen. But for Cimpress central teams, and at Vistaprint, and at several other parts of Cimpress, yes, we have moved to remote-first. We are investing a lot to make this a great experience for our team members, and it is helping us recruit talent from many places where, prior to being remote-first, we could not do so.

You can read the original interview from Ludovic Martin in English here: https://www.ludovic-martin.com/2021/08/robert-keane-interview-think.html 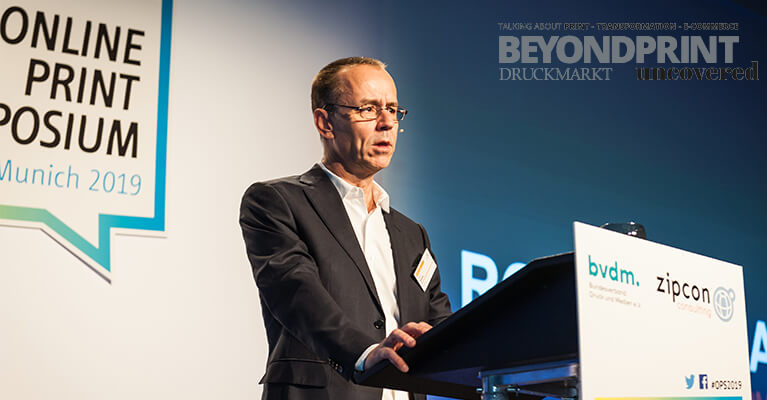 Article Name
News: Robert Keane - Forecast for the post-corona era
Description
In the past we have observed the path of Cimpress and have had intensive discussions with Robert Keane about the industry and his company. At the Online Print Symposium, Robert Keane gave a much-noticed lecture. He has experienced and moved a lot and acts like a metronome in the online print world. Now we have received an exciting interview with the Cimpress-CEO from Ludovic Martin, an observer of the international print industry.
Author
Bernd Zipper
Publisher Name
Beyond-Print.net
Facebook Twitter Google+ LinkedIn more
Pinterest Tumblr Email
Bernd Zipper