Hardly is one takeover in the online print sector announced, then the next big thing follows: LaserTryk will become part of the Onlineprinters Group. What is behind all this?

Only the day before yesterday it became public knowledge that the photoprint sector giant Cewe is taking over Laserline, thereby significantly expanding its area of operations in commercial online printing. The key stakeholders in the Onlineprinters Group, Bregal Unternehmerkapital and Project A, now continue their involvement in European online printing as investors in the Danish printer LaserTryk. The aim of the Group looking forward is now more than obvious. Of course, the position in the German-speaking market is indeed important – but as with the other big players from the D/A/CH region, the focus of Onlineprinters is decidedly in the direction of Europe. As Onlineprinters produces exclusively in Neustadt an der Aisch in southern Germany, the expansion to the north results in broader opportunities to reach customers. Should it bundle the production and logistics capacities of the Group, then the printer’s delivery times for the Scandinavian markets can be kept to a minimum while reducing expenditures at the same time. Moreover, Onlineprinters already operates domains for Denmark, Sweden and Norway – so exactly for the markets where LaserTryk is a leader.

In 2017 alone quite a bit has happened with the Onlineprinters Group: the number 3 in German online printing until now, in the spring it acquired Solopress, a profitable printer from the United Kingdom, thereby strengthening its reach and local presence west of Germany. And now – LaserTryk from Denmark. The Scandinavian web-to-print market leader has brought in an annual turnover growth of more than 20 % since 2011 and was able to chalk up sales of more than 42 million euros in 2015, of which half was by means of offset printing and around 40 % through digital printing. LaserTryk was founded in 1999 and – just like diedruckerei.de – has been online since 2004. The founders, Esben Mols Kabell and Anders Grønborg, started off by printing marketing materials for regional businesses and since the launch of their online print shops, they have operated with aggressive pricing politics. Sales figures show this development has been successful to this day. In terms of their look, I’m not terribly excited by the LaserTryk shop, but the usability is on target and seems to impress Danish customers – probably this is in combination with selection and pricing. Along with the additional sales branches in Bremen, Oslo, Stockholm and London, these are all surely reasons for the cross-border success as well. The Group decidedly wants to use precisely these in the growing Scandinavian market to reach a total sales target of 200 million euros for the fiscal year 2017. This would mean the turnover that Onlineprinters earned in 2016 (105 million euros), still without the two brands Solopress and LaserTryk, would almost double. 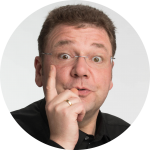 “Warning to all those who procrastinate in making (financial) decisions: even if the print industry isn’t growing as a whole – online printers that are doing well are lucrative investments. Bregal and Project A will surely continue to expand the Group affiliated with Onlineprinters as necessary.” – Bernd Zipper

Of course the question now is the background of the Group’s integration of the Scandinavian market leader? Is it a (complete) takeover, or a partnership? Will LaserTryk continue to operate under its own brand – and what is Onlineprinters hoping to achieve from the collaboration? As first-hand information couldn’t hurt, I went and asked the management of Onlineprinters, Dr. Michael Fries (CEO). He said: “LaserTryk will become a unit of the Onlineprinters Group and both founders will become shareholders of Onlineprinters. Onlineprinters and LaserTryk are both active in the B2B segment. Moreover, with BrandCentral and Whitelabel Web2Print, LaserTryk offers solutions for companies that could also be interesting for our clients in other countries. LaserTryk is a successful online printing company and we will mutually benefit and become stronger together in terms of product selection, IT solutions, and organisation of production, as well as marketing competence and many other areas.”

What other experts in the online print sector are also surely dying to know is whether the growth of Onlineprinters in the coming years is only possible with capital injections from the firms Bregal and Project A – or whether investments will continue to be made in its organic growth. Fries responds: “The online print market is growing on a broad front. With Onlineprinters, diedruckerei.de, Solopress and LaserTryk, we have well-placed brands that have leading positions in their respective core markets and which we will continue to invest in. Therefore we’ll thankfully also grow organically with all of our brands and that will be the crucial growth driver in the future.”

Whether this is now a majority stake in the Danish market leader in online printing remains unknown – as with the transaction volume. Independent of this, one can assume that this holding is also planned as a long-term investment on the part of Bregal and Project A – and perhaps there will also be further “group members” in the near future. Let’s see. LaserTryk will become a part of the Onlineprinters Group and both founders will become shareholders of Onlineprinters, confirms Michael Fries in our conversation.

My Take: As I already said with Cewe’s takeover of Laserline: this won’t be the last merger or acquisition that will help shape the German and/or European online print market this year. Takeovers and partnerships are getting more and more relevant in the online print sector. Groups are growing and multinationals are assimilating smaller and medium-sized players from the segment – it cannot be ruled out that more and more big European online printers will sooner or later develop a Cimpress-like brand strategy with a regional approach. For sure is: for some small online printers with sound operations, this can offer good affiliation opportunities – for others it means withdrawing from the market. At any rate the Onlineprinters Group is one of those committed to an international strategy and has what it takes to be a true “European”.