At the Online Print Symposium, the diversity of business models and products sold online showed just how broad the community of online printers can be.

For example, the creators of the Leipzig-based Posterlounge GmbH declared war on empty walls more than 16 years ago and were thus one of the few providers in the “Art on Demand” sector. Their vision has remained the same until today: To offer art for everyone at an affordable price.

As an online shop and art publisher, Posterlounge offers artists the opportunity to market their works with little effort, thus providing an additional distribution channel. Partnerships with renowned art agencies such as National Geographic, Bridgeman Art and Everett Collection complete the high-quality portfolio.

With the help of effective production lines, the art publishing house and online shop produces an average of five kilometres of premium paper every month, plus other base materials such as wood, aluminium and more. “Art for every wall” includes timeless photographs, exclusive illustrations and classic art prints.

For Florian Teßmer, co-founder and managing director of Leipzig’s Poster Lounge, individualization is no longer just a matter of choice, but has long since become an obligation. He says that the balancing act between quality and mass customization must be successful, as mass customization now accounts for the lion’s share of production at Posterlounge. With 80,000 picture motifs today, the variants (motifs, carrier materials, sizes and finishes, in other words frames) add up to 55 million possible combinations, which have to be mastered with 20 machines in their own production facilities.

“But individualization also has its limits,” explained Teßmer. “By 2016, we had 350,000 motifs in the shop. This was too much. Customers got lost in the shop. Too much customization obviously overwhelms the customers.” Interestingly enough, after the offer was reduced to a quarter of its original volume, the turnover remained unchanged.

Florian Teßmer, who holds a degree in business informatics, has been programming the shop system himself since the launch of the German website. He is responsible for IT and development as well as the external marketplace business of Posterlounge on eBay, Amazon, Otto and other providers. Posterlounge ships throughout Europe and currently has shops in eleven countries – and the trend is rising. In the meantime, foreign business accounts for 60% of total sales. “The shipping of large-format, framed wall pictures in sizes up to 1.20 x 1.80 meters, as bulky goods, is a real challenge,” says Teßmer.

What matters in the end is the goal

Although BVD’s DNA is “printing on paper”, the Liechtenstein printing company wants to become an expert in printing three-dimensional mass customization products. Since 1992, Peter Göppel has been Managing Director of BVD Druck + Verlag AG, which in 1996 was one of the first printing companies to focus on digital printing and personalization.

“As a conventional commercial printer, however, we must continue to meet the challenges of digitization and transform ourselves in order to be able to survive in the future on the market,” commented Peter Göppel during his presentation, describing the steps BVD has taken thus far. “The goal was to develop an innovative and personalized product that can be ordered online by consumers. A further goal was to ensure that the product moves towards a niche. This resulted in the balleristo brand.”

BVD was already a test customer in 2013 for a machine that prints three-dimensional products. The prototype was purchased in 2014, the website balleristo including the shop was set up in 2015 and in 2016 the company invested in a Heidelberg Omnifire 250 for four-colour printing. A five-colour machine of the same type followed in 2017 and this year an Omnifire 1000 with six axes will be installed. The company is investing millions in printing balls, drinking bottles and helmets – with further objects to follow.

To this end, Peter Göppel wants to target the market, B2C and B2B in a very structured way and create demand among manufacturers and platforms. “Initially, we were only active in the B2C segment – this is still a very important market. But we have already put out feelers to the business market and also want to go via platforms such as Amazon or ebay. We also want to go to manufacturers and make mass customization and personalization more widely known,” explained Peter Göppel. In doing so, he sees the future of mass customization as extremely positive: “I think that’s the trend of the future. I also believe that every person wants to be unique – and why shouldn’t companies be?

“We can already see today that the growth curve is pointing upwards every month. Nevertheless, I have the impression that the market development is still at the station – the train is moving very, very slowly in any event. That is why we are now focusing on convincing customers and marketing the advantages. I can’t say whether we will succeed, but we have laid the foundation and now we have to turn the screws to sell the products,” says Peter Göppel, summarizing the challenges of the next few years.

It is always worth taking a look at other markets, especially when it comes to France, our direct neighbour, which is one of the big three European markets. In his presentation at the OPS, Antoine Roux, founder of Printoclock.com, not only assessed the size of the printing industry in France but also mentioned the special characteristics of the French online printing market.

The figures alone are astonishing: France has around 67 million inhabitants, not so much less than Germany. However, the printing industry only has a turnover of € 8.6 billion (in Germany it is around € 20 billion), of which Commercial Print makes up € 3.2 billion.

This market is shared by tens of thousands of traditional printers (official statistics speak of over 17,000 companies), Antoine Roux mentioned 2,945 – and about 50 online printers, of which about 20 are not from France. And the top 3? Just listen and be amazed: Saxoprint, Onlineprinters and easyflyer – the first two might be known as the market leaders in this country, easyflyer is a French company, but it was already taken over by Cimpress in 2015.

According to the report, French printers have completely missed the market. “The online printers in France were almost all founded by marketing people. But overall, the French online market is a reseller-oriented market. And that makes up perhaps 1 to 2 million euros,” explained Roux. But that would still be a third of the commercial print market.

Perhaps the career of Antoine Roux also explains why this is so in France. He started in the 2000s in IT and start-up companies, was enthusiastic about the first successful online companies and wanted to start his own web project one day. But before that, he wanted to fulfil another dream: To work for music bands that only rock! In doing so, he started selling posters and flyers to the entertainment industry. After all, print was the best way to promote bands. In 2008, he founded PrintOclock with his marketing and IT skills. Since 2012, he has been producing in-house (mainly in large format) and, as a growing and profitable company, prints around 1,000 jobs a day. However, the online print market could grow in the next decade, especially with packaging and labels, believes Antoine Roux.

My Take: Two or three dimensions are no longer playing a role in online printing. And individualization and mass customization are an unstoppable trend. We must learn to think outside the box and occasionally inside it, if there is no other way. After all, transformation does not avoid contradictions. It cannot be ruled out that this occasionally requires patience. However, this should not prevent us from continuing along our chosen and occasionally visionary path with full resolve. But this is precisely what makes the makers of Onlineprint so special.
Summary 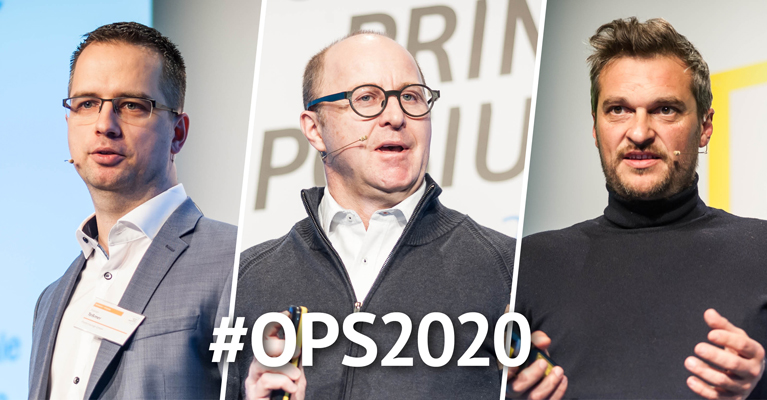