That which is digital does not necessarily have to be green. After all, information technologies and their digital consumption are not an insignificant driver of greenhouse gas emissions.

In the current climate debate, the roles seem to be clearly distributed: Industry, traffic and print are on the side of the bad guys. And on the other side, digital service providers and information and communication technology (IT) are usually on the good side. The general public is therefore convinced that digitization is part of the solution and not part of the climate and environmental problem.

But that is pigeonhole thinking! Because the matter is far more complex than this. Life is not as easy as politicians or lobbyists like to portray it. And the alternative black or white is to be found only in extremely rare occasions – generally negative issues tend to have something good about them and positive issues something bad.

A study by the think tank “The Shift Project” makes this abundantly clear. The French organization “measured” the environmental footprint of the IT sector and concludes that the environmental impact of the digital economy is constantly underestimated.

Environmental impacts are not trivial

The energy consumption of digital technologies is massively underestimated by consumers in view of the miniaturization of equipment and the “invisibility” of the infrastructures used. This is reinforced by the availability of services in the cloud that make the real use of energy almost imperceptible and minimizes the environmental impact of digital technologies.

But the pollutant balance is not that harmless. The study puts the IT sector’s share of global greenhouse gas emissions at 3.7% – almost twice as much as the contribution of civil aviation (2%) and almost half of the emissions of all cars and motorcycles (8%). The authors of “The Shift Project” are particularly concerned about the immense increase in “digital energy consumption” by around 9% per year. If the trend continues and the volume of data on the Internet continues to grow by around 30% annually, the IT industry would be responsible for around 8% of all greenhouse gas emissions as early as 2025.

While the energy intensity of the global gross domestic product is currently falling by 1.8% per year, the energy consumption of the IT sector is growing at the same time by 4%. The direct energy consumption caused by digital technologies has increased by 37% compared to 2010. And CO2 emissions from digital technologies have increased by about 450 million tons in OECD countries since 2013, while CO2 emissions worldwide have decreased by 250 million tons over the same period.

The reasons for the rapidly increasing energy consumption are briefly listed.

1. The number of smartphones worldwide is growing by 11% per year. At the same time, they bring with them increasingly energy-intensive features.

3. The industry relies on the Internet of Things to realize projects such as more intensive networking in the sense of Industry 4.0.

4. E-commerce is constantly growing and has triggered a surge in IT and logistics services.

5. The explosion of video streaming is responsible for over 80% of the increase in data traffic on the Internet. If you watch a video in the cloud for ten minutes, you consume as much electricity as if you were sending five hours of non-stop e-mails with attached files. The streaming of twelve videos corresponds to an electricity consumption of 2,000 watts (2 kWh) and thus requires 1,000 times more energy than the normal operation of a smartphone.

The fact that digital devices are becoming ever more energy-efficient changes little in their energy consumption – because at the same time their use is increasing. Although the battery capacity of smartphones has increased by 50% over the past five years, the frequency of charging has remained constant due to how intensively devices are used. This is a typical example of the rebound effect. We talk about this effect when efficiency in the use of resources is increased, but consumption is not reduced to the same extent.

This is also known from the automotive sector. Because engines are being developed that consume less fuel, consumers are happy to afford cars with more horsepower, which in turn consume more fuel. Or, as a study in Japan has shown, drivers who themselves believe they have bought an “ecological” car cover a good 1.6 times more kilometers than with their conventional car. The good conscience of now driving a more economical model therefore sometimes contributes to counterproductive behavior. 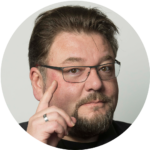 “The times of digital being equated with green are well and truly over. The IT sector’s share of global greenhouse gas emissions is now almost twice as high as the contribution made by civil aviation”. – Bernd Zipper.

IT instead of Print?

Many companies, particularly in the retail and service sectors, are shamelessly exploiting the ignorance of such relationships by advising their customers to switch to electronically sent invoices. The cloak of climate protection is put on, arguing with lower paper consumption, but concealing the fact that this is merely a matter of cost reductions. The telecommunications or insurance company saves on printing the invoice, reduces shipping costs and simultaneously reduces postage costs to zero. This pleases the controllers but does not necessarily make the companies more credible.

Because it is of course concealed that the dispatch via e-mail requires a not to be underestimated energy input (above all with the consumer). Perhaps not significant for a single e-mail, but in total a huge chunk. Because to open a letter, you need a letter opener at most. For the electronic invoice, however, a computer and monitor must be switched on. If the recipients then print out the invoices on their domestic and probably less energy-efficient inkjet printer (where they undoubtedly use paper, but probably not recycled paper), the climate-acidity is perfect. Companies have passed on costs and energy to their customers regardless of climate and environment. Bravo!

For example, digital technologies are often advertised as climate and environmental protectors or as a means of reducing energy consumption by promising a more efficient use of resources: Transport (networked mobility), production (industry 4.0), services (e-commerce), buildings (smart building), agriculture (smart farming), communications (green IT), etc. However, the positive effects of IT on energy consumption are usually overestimated because rebound effects are ignored, and interactions are neglected.

Of course, electricity consumption is ultimately always the responsibility of the individual consumer, who, for example, requests more data volume or purchases new digital terminals – but at some point these also have to be disposed of (but this is a completely different construction site). In any case, even supposedly unsuspicious activities are often associated with environmentally relevant consumption and costs.

My take: If I order a T-shirt online, I save time and the trip to the city and avoid the pollutant emissions associated with driving but trigger a chain of other actions such as more packaging (parcel instead of shopping bag), courier service, etc.. For this reason alone, the assessment of climate-relevant effects is associated with many uncertainties. But if consumers are informed incorrectly, not at all or only too little, this is questionable. This also applies to the large IT companies. Many give themselves a visionary and environmentally conscious image, but at the same time develop products for the garbage dump. The ranking published by Greenpeace on the environmental policy of large IT companies, in which many of the giants do not perform very well, speaks volumes. The times in which digital is equated with green are well and truly over. 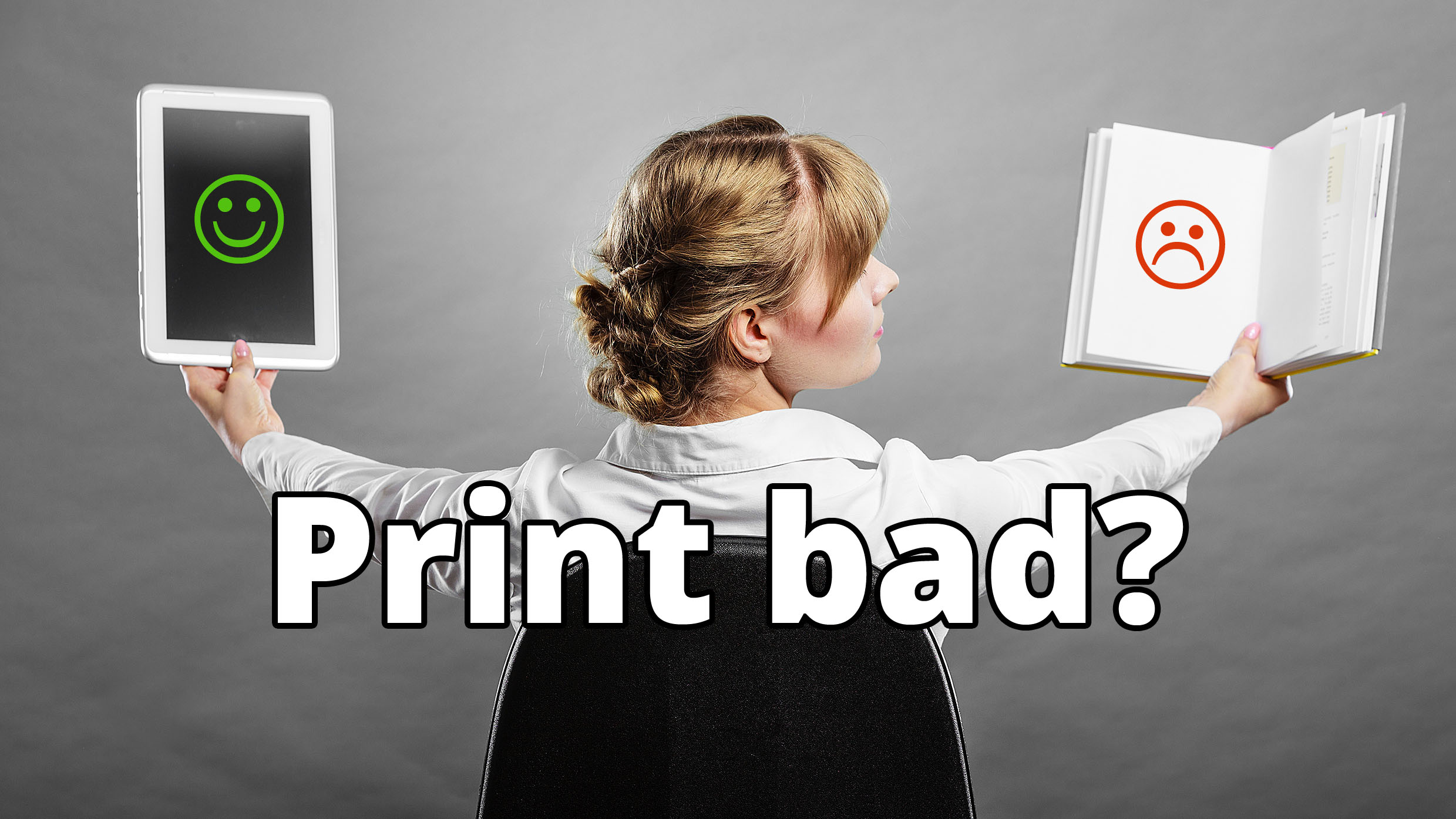 Article Name
Environment: Print bad, digital good?
Description
That which is digital does not necessarily have to be green. After all, information technologies and their digital consumption are not an insignificant driver of greenhouse gas emissions.
Author
Bernd Zipper
Publisher Name
www.beyond-print.net
Facebook Twitter Google+ LinkedIn more
Pinterest Tumblr Email
Bernd Zipper