It is now almost four years since we launched the “Print Lives” initiative and managed to put plenty of printing industry sceptics right on a number of issues. The insights gained have been shared many times over and print fans were not shy about expressing their agreement. The time has now come to focus on the strengths of print and to take a look at what has happened in the meantime, what path has print taken and – very important – in which direction the print industry is tending to go in the future.

Consistent, reliable, tangible and promotional – you can still describe print using just these few trenchant words. Many people continue to regard print as the opposite pole to fast-lane digital, which is why they prefer to rely on print, if quality is their benchmark. Reading print was, is and continues to be not just an enjoyable experience, but it also generates a particular perception by means of visual and haptic appeal. Anybody, who “just” looks at their photos in digital format, is missing out. From 2013 to 2015 at least 300,000 more photo books were sold year on year just in Germany (2013: 7.9 million; 2014: 8.5 million and 2015 8.8 million). A printed photo book has a different status to a couple of pictures on your smartphone or computer, where that haptic experience is simply lacking.

Print has a promotional impact, especially at the Point of Sale. Customizable Coca Cola bottles and cans, which have helped the corporation to increase sales by more than 1 percent during promotion periods, are a prime example of this. In relation to other promotional activities, the PoS is still the place where most buying decisions are made, and indeed that is primarily attributable to products from the print shop, e.g. attention-grabbing displays or roll-ups.

Print products are still regarded as having greater credibility compared to digital (marketing) messages. That can definitely be attributed to the fact that the reader views them for longer and more attentively than digital adverts. That applies not just to outdoor advertising, which is based on large-format print, but also to widespread and ever-improving personalized mailshots. The observer pays more attention to these than they do to e-mails, which either end up in the Spam folder or are consigned unread to the digital Trash bin. Fact 1: printed mailshots have a 37% better success rate than e-mails – and that trend is heading north.

Anybody, who believes it is environmentally friendlier to read digital, should think about the terms, sustainability and recycling. Recycling options and rates are significantly better for printed paper and cardboard than for electronic information media – here we have a recycling rate of more than 70% compared to some vague, low figure that’s down to material separation and utilization issues. Obviously paper recycling also consumes energy, but some paper and board plants also take care of water treatment for their small-town communities at the same time! And reading books on readers or tablets only makes sense if you are an avid reader, who reads more than 10 books a year, otherwise the digital book memories have a worse environmental footprint than printed books, which are quicker and more convenient to read anyhow. Fact 2:  80% of all books sold worldwide in 2015 were made of paper and printing inks.

An increasing quantity of magazines contrasts with declining production volumes of periodicals. In this segment it is a real challenge to offset declining quantities by means of increased qualitative diversification. While the number of printed newspapers and other regular publications is on the decline, especially in saturated markets in the West, global growth in printed daily newspapers of some 1% is anticipated until 2019. This can be primarily attributed to increasing literacy in countries in which many people speak the same language. So print will ensure progress in these so-called developing countries for some time to come. That is because it is likely that the newspapers in these countries will be joined by magazines, which account for substantial production volumes.

Digital and print compete against each other in several but by no means all respects. The link to “new” media has already been established in many segments. Thus, for example, IKEA has linked its catalog, which has an annual global circulation of more than 200 million copies (!), with an app, which, for example, provides 360° views and makes digital interior design accessible, for several years now. The classic offline product therefore forms the basis of this functional, updatable offline/online link. It’s a similar story with other print products like business cards or magazines, which feature readable codes or NFC integration that bridge the gap to digital. So print has not just been treading water – it is what generates the appeal of other media channels in the first place! Analog and digital products are not kept separate in every respect; they haven’t been for a long time and certainly won’t be in the future either.

And: more technology means less paper and print – that is just not true. Besides the above-mentioned print-digital link in several product applications, online retailing in general also demonstrates that print continues to be in demand. Production and use of product packaging and cardboard boxes has increased substantially worldwide (from 2000 to 2015 by more than 24%). And higher paper and cardboard consumption correlates positively with an increased quantity of potentially printable substrates, which will also ensure greater volumes in the print industry in future. According to forecasts, the number of parcel shipments will increase to around 3.8 billion just in Germany alone – resulting in further growth potential for the packaging and label print segment. 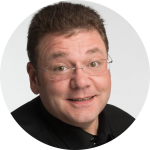 “The appeal and benefits of print products remain undiminished. The fear of substitution by other media is usually unjustified. And print still has a lot to offer both in the present and in the future.” – Bernd Zipper

The future of printing

Customized print products continue to gain ground in saturated as opposed to unsaturated markets. That is due in no small measure to the increasing range of printing options provided by inkjet technologies, which also allows for the functional printing of forward-looking products. Printed solar cells and strip conductors are just two examples of how print is also gaining a foothold in other business segments outside the graphic arts industry and thus creating new sales opportunities.

But the packaging and label print segment is shaping up nicely in the current situation. In order to package luxury products and foods appropriately and to meet consumers’ needs, the assumption is that this segment is also set for global annual growth of up to 4% over the next few years. Added to this is the fact that smart packaging and packaging with sensitive coatings will have to accommodate future consumer safety requirements.

Are businesses continuing to invest in print?

According to statista information, gross investment rose each year from 2013 to 2015 by at least 7% just in the German print industry – in other words businesses are continuing to invest heavily in new technologies and in enhancing plant performance and workflow efficiency. Overall, market and business trends for the current year are also characterized by an increased focus on efficiency, e.g. in the value chain, which is where online print has its strengths.

My take: print is alive and well. And even if print volumes are decreasing in certain segments, people are still continuing to print – in defiance of the crisis in the print industry – and indeed more than ever before. But, print too is only “finite” – in a future blog post I will tackle the issue of “Print 10.0 – the print industry in 2030”. Until that time comes, we will just keep on printing, very efficiently and always in register 😉