By Sandra Bellof on 9. November 2016 Technic

Affinity Designer and Photo are inexpensive photo editing tools that can be used in the printing and publishing sector and they represent an alternative to Adobe.

What exactly can these very recently launched tools do and what are their strengths?

Be it on their PCs at home, at vocational school and college or in the companies where they work,   many users have only got one, maybe two or three graphic design and photo editing software tools on their radar. The DTP software provider pool has always been teeming with plenty of big fish and some rather more unknown or neglected applications in the era of Adobe dominance. It’s the same story with professional and semi-professional photo editing, where the market is dominated by the same well-known top dogs. In our modern age of cloud services and subscriptions, software versions that you can buy have to some extent taken a back seat. So that is reason enough to profile a provider (a not entirely unknown quantity in professional circles since 2014) offering two low-priced programs.

Serif was established in 1987 and since then has always sought to provide alternatives to existing design and publishing programs. Its objective has been to supply products that are inexpensive and at the same time feature a wide range of functions to meet professional requirements. Nottingham (UK)-based Serif’s Affinity Designer even won the 2015 Apple Design Award and Affinity Photo won the Best Mac App award. According to company sources, currently more than 6 million users worldwide use at least one of the software products provided. As part of a photo editing, graphics and publishing package these tools are like a breath of fresh air in the graphic design industry. In relation to other providers, that of course does not sound like very much. But, since both Affinity Designer and Photo for Windows-based systems are yet to be released, that is nevertheless a respectable quantity, which has plenty of potential to increase. And what qualifies Affinity products to be used in the online print sector or put another way what actual benefits do they offer print providers?

Assuming you get kitted out with Affinity Designer and Affinity Photo as well – that will only set you back around 100€. The Creative Suite of course provides a wider range of functions, but how far does 100€ for the rental version take you? Not particularly far…  At least Adobe was offering to replace those annoyingly expensive non-update workstation licenses with the update-capable CC version, which suited some companies down to the ground. But not everybody is a fan of long-term tie-ins – so it’s back to the purchase versions, of which even the old versions, like those supplied by Adobe, cost many times more than the Affinity products.

It should be obvious that Serif is not just targeting private users with Affinity. Indeed volume licenses for companies and educational establishments can also be acquired via the Mac App Store in addition to the single-user licenses. Obviously the previous restriction to the world of Apple still limits distribution somewhat. A not inconsiderable portion of the graphic design industry uses Apple computers anyhow; furthermore a free beta version of Designer has been available for the Windows system since mid-2016. And don’t forget the announcement of the launch of Affinity Photo for Windows and a further layout program in 2017 – so there is no longer an obstacle to distributing the programs in the graphic design industry.

The Affinity Designer covers a key portion of the functions in Adobe’s graphic design programs, while Affinity Photo is giving the photo editing top dog, Photoshop, a real run for its money in range of functions terms. No matter where you read reviews online, Affinity users usually report good to very good experiences with the products. That usually includes users, who are either not keen on Adobe’s regular payment mode or those, who like to give new software a chance and now prefer either or both of Serif’s tools compared to existing offerings. Added to the price argument is simple usability that compares well with Adobe products, according to user sources. 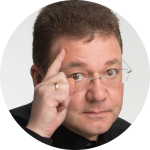 “By launching its Affinity products, Serif has already struck a chord with many people. In my opinion there is nothing to stop it spreading further, even in the print industry – so top dogs, you’d better look out!” – Bernd Zipper

I don’t want to get bogged down in the technical details or in listing each individual function. What matters are the overall package and key issues that demonstrate the functionality of Affinity Designer, as well as in terms of integration in existing workflows. There’s no denying the visual similarity of the user interfaces to those in Adobe’s programs. Affinity Designer provides an extensive range of functions, which are suitable for most jobs involving vector and pixel graphics. All industry-relevant formats are covered in the form of full support for SVG, EPS, PDF, PDF/X and FH files and a seamless PSD file import function. There is also no lack of color spaces: gray scales, RGB, RGB Hex, CIE Lab and most important of course CMYK ensure general workflow compatibility, likewise jobs involving ICC profiles. Realtime adjustments of pixel graphics as well also enable the Affinity Designer to meet other requirements too.

Affinity Photo is as high-performance as and comparable in terms of usage to Photoshop. Based on a really intuitive user interface, the program enables users to enhance, correct and retouch digital photos. Operation is intuitive not just because of the simple design, but also because the well-disposed photo editor is more or less familiar with many of the tools from the proven programs offered by other manufacturers.

As RAW-capable photo editing software with a huge range of functions, Affinity Photo is suitable both for pre-press and for professional and amateur photographers. As with Affinity Designer, it enables full workflows in RGB, CMYK, CIE LAB or gray scales with ICC color management and editing in all standard file formats. Working at 16 bit per channel is also feasible, which some other photo editing programs no longer support when working in adjustment layer mode. Perhaps the odd Photoshop and Lightroom subscriber will in future go with Affinity Photo,  to reduce running costs.

My take: If Serif and its Affinity products are able to get a permanent foothold in the market, then there is nothing to stop them getting established in the print industry and therefore in online print. Not only is the savings potential huge compared to competitor offerings, Affinity also appeals on the strength of its breadth and depth of functions plus regular free updates. I wonder how  Affinity Publisher, due to be launched in 2017, will fare. As soon as Serif starts actively offering all its tools for Windows systems in the future, the established players had better come up with an idea of what to do next…