We constantly hear: Digitization has to move faster. In schools. In administration. Currently, of course, also with the health authorities, in order to get a better grip on the Corona crisis. And in the economy, as well.

It’s as if everyone believes that digitization could easily solve all of our problems. But we all know that this is not the case. Digitization not only solves problems, it also creates them. Lots of them. However, it is not always possible to foresee what these problems will be.

Clearly, digitization can optimize processes. Improve processes. Artificial intelligence (AI) can now even “fold” proteins and thus help to cure diseases. But digitization also comes with a bag full of disadvantages: It is expensive. It increases dependency. On systems, for example, but also on providers. And digitization makes people vulnerable. Susceptible.

Recently, there has been another aspect that is playing an increasingly important role: sustainability. At the latest digital summit, held at the beginning of December, politicians and experts discussed this issue in depth. How sustainable is digitization actually? Does it make the world more climate-friendly – or does it not burden the environment more than it really benefits?

In other words, we have a lot of questions to ask. For example, can drones help in agriculture, can AI be used to optimize traffic flows – and can this save energy and reduce the carbon footprint? There are undoubtedly many interesting approaches. It’s all about picking the right ones and marching off.

Digitization harbors many disadvantages as well

At the same time, however, digitization involves enormous consumption. First and foremost is the tremendous demand for energy: data centers consume a great deal of energy. The EU wants to curb the unchecked growth of energy hunger. Due to ecological reasons. This is both right and important – and therefore also a topic at the Digital Summit. But far too little attention has been paid so far to the question of where all of the raw materials come from which are built into modern technology: rare minerals and rare metals in particular. They are sometimes mined under predatory conditions, in China, in Chile, in Africa. With environmentally destructive, unhealthy and inhumane methods.

Nobody is talking about wasting resources

An unreservedly recommendable documentary on Arte proves: We are all lying to ourselves if we believe that ecological change really exists.

Modern technology – and also digitalization – are taking their toll. And politics is looking the other way. This is undoubtedly part of sustainability but it is probably not an issue at the digital summit. After all, politicians don’t like to deal with the issues of resource depletion and waste.

But this year or next year they will be dealing with another aspect of digitization (for which there will be applause): better protection for platform employees. Digitization is creating many precarious jobs, whether in delivery operations or as Uber drivers.

Today, there are many so-called “solo self-employed” (another one of those non-words, because it sounds like voluntarism and self-determination, not exploitation and social decay) who are dependent on platforms, but are not really employed there.

Likewise, Amazon employees are monitored by their breadwinner – and are not necessarily to be envied in every respect. Digitalization all too often means pure turbo-capitalism: Some earn, others pay the bill. And that includes the environment.

For most of us, the Internet is a bit like magic. We pull out our smartphone or open our notebook – and the whole world appears on the display. News, messages, websites, photos, videos – just a mouse click away. And hardly anyone thinks about how this actually works.

Data centers make it possible. Lots of them. At the big IT giants like Google, Facebook, Microsoft. At the streaming services. At the providers. All these data centers and cloud services are extremely energy hungry. Around 2.7% of Europe’s electricity demand is attributable to such data centers. And the trend is rising. By 2030, the figure is expected to be 3.2%. And that’s just the data centers. The energy requirements of the users’ devices are added to this.

However, the EU has set itself ambitious climate targets. That’s why data centers must also conserve. Especially energy, in order to reduce CO2 emissions.

The EU has therefore presented a catalog of proposals and requirements that data centers above a certain size will have to meet in the future.

Optimizing data centers – it pays off

At the same time, the excess heat from the data centers can and should be used, e.g. for heating or to recover energy. Of course, the use of renewable energies is also particularly important.

Last but not least, data centers can and must also be optimized so that they consume less energy. Where data centers are located plays a role as well. Southern Europe is not the ideal place: the temperature there is warm anyway – and cooling produces higher CO2 emissions. In Norway, on the other hand, all you have to do is open the windows … Seriously, there are data centers by the sea that cool themselves with seawater. So there are ideas, and now they have to be implemented.

At some point, there will certainly be certificates in Europe that people might pay attention to. One thing is certain: The issue has reached the political arena. Not just in Germany, but throughout Europe. Data centers will increasingly have to face the question of what their energy balance looks like. And possibly also service providers who offer cloud services.

It is therefore high time that this aspect is also taken into account if digitization is to be driven forward. 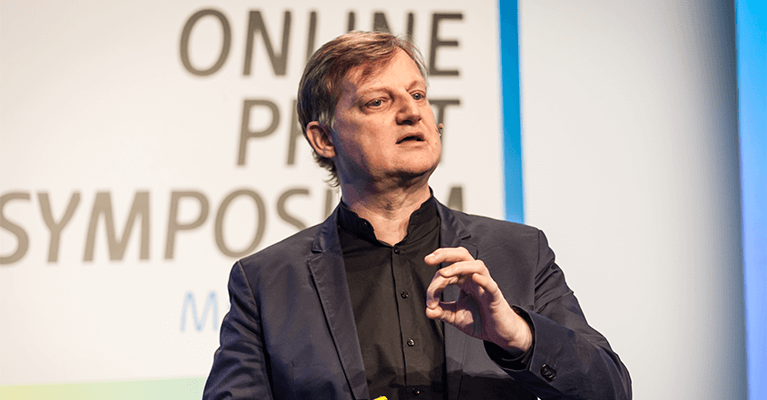 Article Name
Technic: Problem solver? How sustainable is digitization actually?
Description
We constantly hear: Digitization has to move faster. In schools. In administration. Currently, of course, also with the health authorities, in order to get a better grip on the Corona crisis. And in the economy, as well. It's as if everyone believes that digitization could easily solve all of our problems. But we all know that this is not the case. Digitization not only solves problems, it also creates them. Lots of them. However, it is not always possible to foresee what these problems will be.
Author
Jörg Schieb
Publisher Name
Beyond-Print.net
Facebook Twitter Google+ LinkedIn more
Pinterest Tumblr Email
Redaktion